Holiday Note: I’ll be taking a one week break between Christmas and New Years so there will be no #ThursdayDoors link-up post on December 27th. For regular #ThursdayDoors participants please consider the last post of 2018 on December 20th as an invitation to do a year-end recap post of your own favorite door discoveries of the past twelve months.

Last week we looked at the military portion of the Louisbourg Fortress National Historical Site, so I thought this week I’d show you some of the doors in the actual town the fortress was built around.

While we were there this past summer we took a guided tour which allowed us to cover a lot more ground and also got to find out oodles of interesting info and historical tidbits.

“Hey there Norm before you get too far into this, what’s the difference between a Fort and a Fortress?”

That is a really good question! So glad you asked 😉

So there! Don’t go sayin’ I never learned ya nothin’ here on Thursday Doors awright. Plus I also saved you the $7.00 for the tour 😀 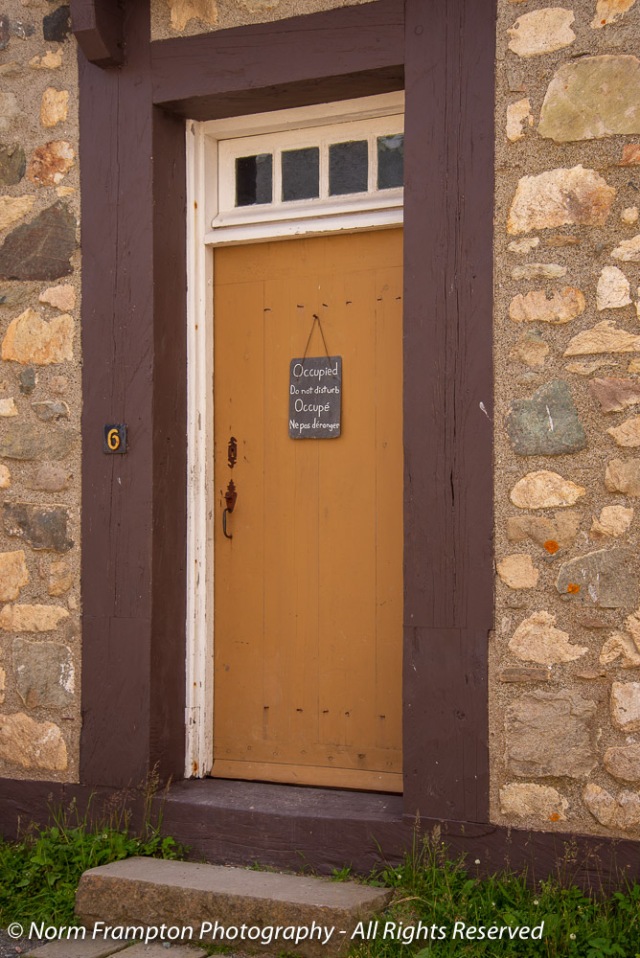 Parks Canada runs a small B & B onsite that you can actually stay in, hence the “occupied DND” sign on the door.

“What else did you find out, Norm?”

My, aren’t you ever inquisitive today 😀

Well, there’s a reason why there are no grave markers to be found in the cemetery.

Back in the early-mid 18th century most of the French military and citizens/settlers used wooden crosses instead of tombstones. Wood was much cheaper you see, but since wood doesn’t hold up nearly as well to the elements as granite, well there’s nothing left of those markers today, so no one knows who is buried where.

This cross is a replica of the original which was finally recovered from Harvard in 1995.

We were also told about the original iron cross of Louisbourg’s  cemetery which was taken by a New Englander who had been fighting with the British when the fortress was captured in 1758.

The cross was discovered among some other artifacts at Harvard University in Boston in the mid 1990’s, and was returned on loan to Parks Canada, which keeps it on display indoors and out the elements today. 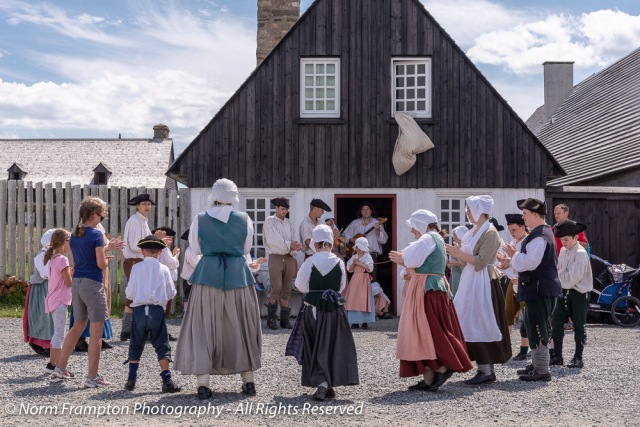 We also learned that since a good portion of the population was not literate back then, whenever possible businesses used symbols instead of signs with writing, in order to advertise their products and services.

Good news for the weary traveller!

A good example: Seeing a mattress hanging out the window at the local inn meant, une chambre disponible à louer –  a room available to rent.

At it’s peak the town had almost 5000 inhabitants and contained a number of inns, bars, bakeries, various merchants, and of course stables, as well as some fancy, and some not-so-fancy homes. 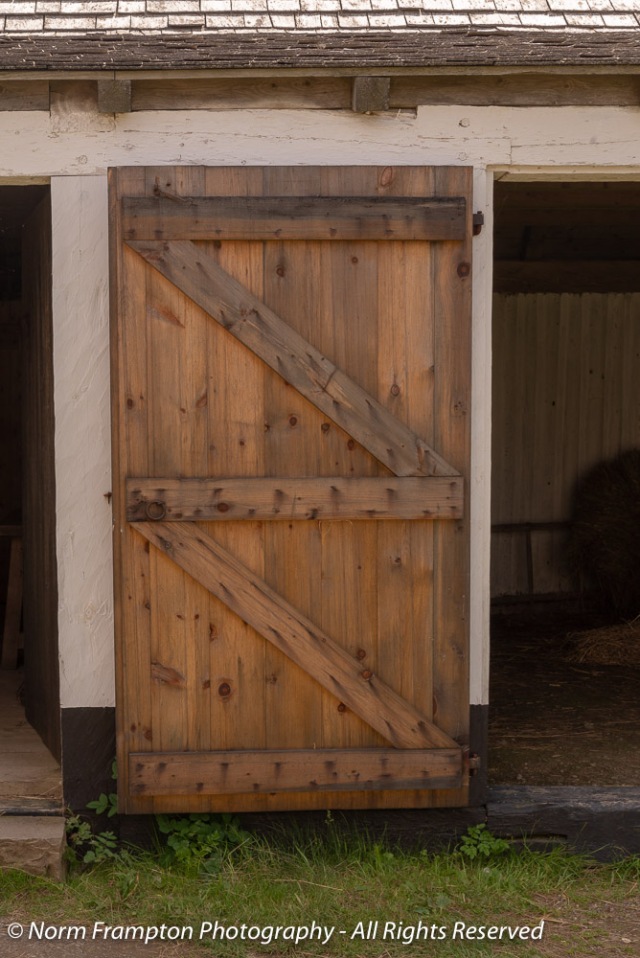 Just like today, money and social status dictated what kind of home you could afford to live in.

This would have been the home of one of the very well-off merchants in the town. 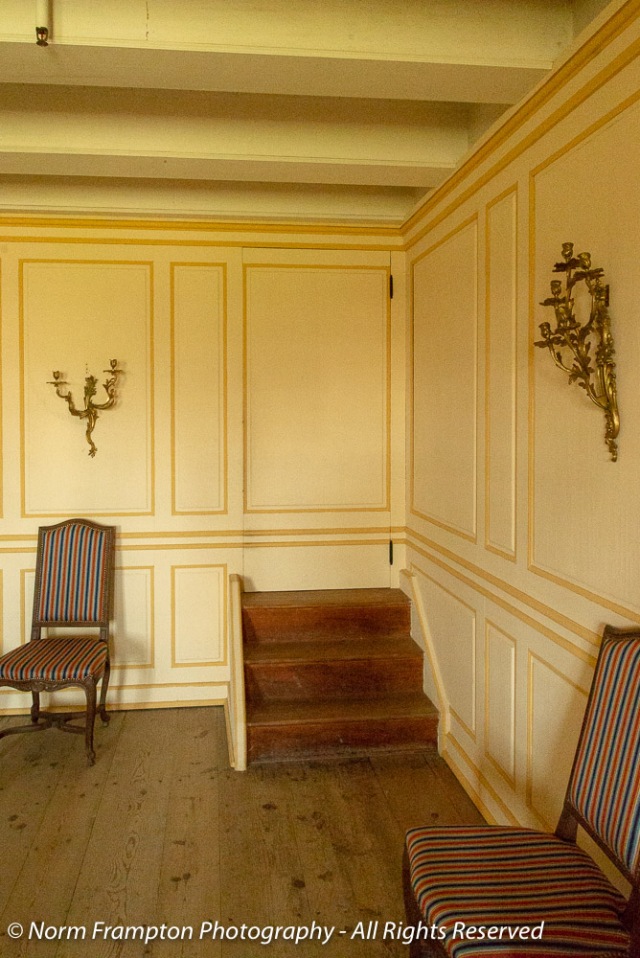 There is a door in there at the top of the stairs. See it?

However unlike today, there was very little chance for upward mobility. Most people who were born poor, stayed poor, worked hard, and died young… 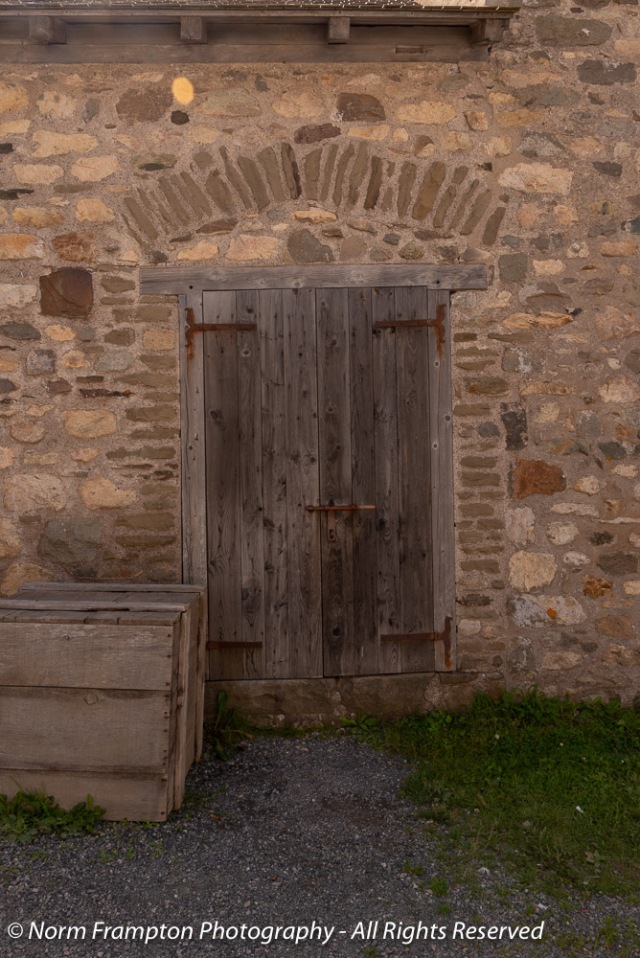 and lived in much less glamorous accommodations.

Thanks for dropping in this week. Perhaps you’ll get to visit this place in-person one day for yourselves. In the meantime I hope you enjoyed our brief tour.

Of course tipping is not obligatory but if on your way out you do feel so inclined, please feel free to drop a little something in the “comments box” below  🙂

Hey, don’t forget! If you share your posts on Twitter and Instagram make sure to use the #ThursdayDoors hashtag to make it easier to find you, and please do take a few minutes to visit some of the Thursday Door posts shared by others.

This site uses Akismet to reduce spam. Learn how your comment data is processed.

Travels | Both Near & Far

Now, Here and Somewhere Else

And then I stop and sit and eat.

Life In A Suitcase

Decided to give up my home and travel to unknown destinations providing healthcare to the underserved. Also an Indie Author and Amateur Photographer. Take my hand and travel along with me, let's learn from each other and somehow make this world a little better. All photographs on this website are my own. Sincerely, Cathy aka Polley93

the only deadhead in the hameau

From the depths of the French countryside, the miscellaneous musings of an old tie-dye wannabe

I lost my lens cap..
LIVING WITH MY ANCESTORS

Mostly photos with a dash of stories

Colouring by touch : altering by thought : fed by feeding.