Here’s another installment in my continuing series of relationship advice for young people. You can read the initial installment here.

Today’s made-up question is from a fictional forlorn fellow named Barry in Moose Jaw, Saskatchewan (yes this is a real place), who writes:

My girlfriend and I have been together for over a year now and everything is going well except when it comes to communication. I do my best but it seems that whatever she says means the exact opposite of the words I hear.

Last week I told her I wanted to go to the ball game with my buddies after she had made plans for us to go for supper at her mom’s and she said, “Go ahead, do whatever you want.”

The answer to your first question is simple; yes Barry it is you.

Understanding the subtleties of womanspeak and picking-up on the powerful non-verbal clues women give off are critical skills for any man who wishes to maintain a successful healthy relationship with a lady.

And that’s where the Advice Guy comes in!

They say that no man is truly married until he understands every word his wife is NOT saying. 😀

You see Barry unlike men, ladies rarely will tell you flat out what they want. Generally though, only younger ladies are this way so there is hope.

You’ll notice that after many years of banging her head against a wall only to realize you’re too clueless for subtlety, if she hasn’t thrown in the towel on you altogether, an older lady will give up in frustration and simply tell you what’s on her mind.

You know, like adults should; except for all the sarcasm.

And these Barry are what we call the ‘Golden Years’ 😀

During the golden years things are made much simpler for us. She’ll simply say, “No I already committed us to going to my mother’s, there’ll be other stupid games you can go to” and that will be the end of it.

If you’re wondering, in a future post I’ll address the issue of whether or not to dig in and hold your ground based on such important factors as: regular season vs. playoffs or dugout vs. nosebleed seats.

But after only a year, you guys aren’t at that stage yet, so what’s a fellow to do in the meantime?

Good news! Using the time honored technique known as Stop, Drop and Roll, domestic peace and harmony are only three steps away.

Image courtesy of photostock at FreeDigitalPhotos.net

What’s that? You thought Stop, Drop, and Roll was a technique used only by people who were on fire?

Well Barry everyone knows that if your woman is truly pissed at you, you may as well be on fire so yes, Stop, Drop, and Roll does apply.

Some of the telltale signs that you’re in trouble include:

If you notice any of those warning signs then it’s time to put the technique into action:

Image courtesy of digitalart at FreeDigitalPhotos.net

Stop what you’re doing. Stop moving. Stop thinking. Stop breathing. In fact, just stop everything. Mostly though, stop talking because nothing you can say at this point will make things any better. As my daddy would say, “put down the shovel son, the hole is deep enough.” So do yourself a favor and exercise your right to shut up.

Drop the act where you pretend not to see that she’s upset. Drop your pride or ego at the door (you can put them in that bowl she keeps your man-parts in) and be prepared to admit you were wrong.

If you have to, Drop to your knees and beg for forgiveness! 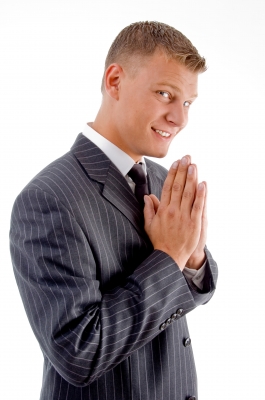 Image courtesy of imagerymajestic at FreeDigitalPhotos.net

Be prepared to Roll with the blows, because dude you are going to get hit. I don’t mean literally, physically of course; though I’m told that some guys actually like that sort of thing.

I mean in a hell hath no fury… kinda way.

Remember: If she’s yelling, this is a good thing. It means the lines of communication are still open and she hasn’t given up on you yet; so listen. Pay attention to her concerns and Roll into contrite apologetic mode.

This doesn’t mean doing something so obviously desperate as rushing out to buy her flowers either.

Now is the time to acknowledge your error and give her hope by genuinely committing to not making the same mistake again.

In any case there’s no point in making the same mistake again, not when she’s going to find so many other mistakes that you’ll make in the years to come 😀

*Legal Disclaimer: while complete silence is a situation to use the Stop, Drop and Roll technique, if your partner begins speaking to you in an extra quiet calm tone or from between clenched teeth, this may be a sign of a deeper level of fury in which case Stop Drop and Roll may not be right for you. In such cases, please seek immediate temporary distance between yourself and your sweetheart, such as separate area codes, cities, or even continents. Failure to heed this warning may lead to a serious and permanent condition called death.

Need advice about your relationships, real or imaginary? Then reach out with your questions to The Advice Guy via email at:

All inquiries will be kept anonymous, unless of course they have the potential to be really embarrassing, in which case all bets are off.

31 Responses to Advice For Young Men – Stop, Drop, and Roll