Despite the primarily French Roman Catholic heritage in the province of Québec, Anglican churches are not that hard to find in Montréal and its neighboring communities.

Yes the area was extensively explored and settlements founded by the French in the early to mid 1600’s, but the region changed hands between the British and the French a number of times over a 200-year period and this also brought us successive generations of early immigrants from England, Scotland, and Ireland, as well as France.

Today the Anglican Diocese of Montréal is made up of some 250 churches, including this old stone beauty in the village of Rawdon about an hour drive northeast of the city, in the Lanaudière region.

The parish was founded there in 1821 a few years after English, Irish, and Scottish settlers with King’s land grants in hand, moved into the area to set up a farming community.

The first church at this location was a log structure that was woefully inadequate. Then in 1834 a wooden church was built that it turned out, wasn’t much better.

The stone church that stands there today was started in 1857, and has been actively serving the Anglican community in the area ever since.

As I took a walk around the building I discovered a few lovely red doors along the side of this beautiful structure.

I got to chat a bit with the groundskeeper who told me they had received Provincial Heritage Building Status about ten years ago which helped with financing for some of the major structural repairs that were needed at the time.

I was also told that a few years later the parish found out how Heritage Building status can be a bit of a double-edged sword. Yes it gives them access to public funds for some of their critical upkeep, but it also requires them by law to use much more expensive original materials for any repairs or renovations they do.

For example in 2010 when the roof needed to be re-shingled, they found themselves being told by government officials that the modern asphalt shingles on the roof at the time would be have to be replaced with original cedar ones at a much higher cost! 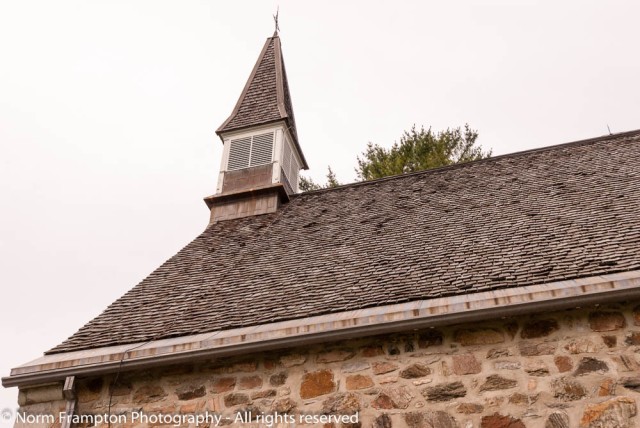 Mind you it does add something nice to the look, don’t you think?

As always I thank you for looking 🙂