The Kid in 27C – Fear, Racism, and the Excitement of Business Travel 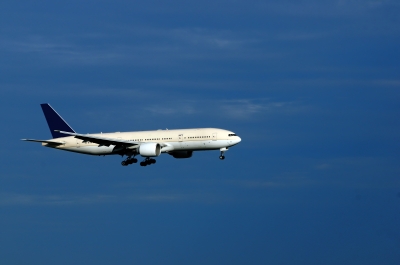 Dave and I sat in the terminal in Philly waiting for our connection on our way from Montreal to Atlanta. Two middle-aged white guys on a business trip to a trade show; yawn.

Throughout the concourse we noticed dozens of security personnel patrolling and making their presence known.

There were youngsters in military uniforms coming and going in every direction, boarding or deplaning at just about every other gate; so many of them in only this one airport that if you started to extrapolate for the entire country the numbers were unsettling.

Then there were the Public Address announcements every ten minutes like clockwork. Three musical notes to get our attention: dum-ding-dong, followed by a calm but insistent male voice letting everyone know that today’s terror alert level was Orange.

The recording went on to remind us to keep an eye on our bags at all times and to report any suspicious activity to the nearest security personnel.

For two outsiders witnessing this for the first time, the message was a conscious, consistent, color-coded reminder from a government to its citizens that the country was at war.

As a marketer I had to admit, they had the branding down pat. The value proposition may have been a little cloudy, but the message came through loud and clear: Be afraid, stay afraid, vote Republican, we’ll protect you.

I also remember thinking that assessment might be unfair. Smug Canadian. Wait till you guys get hit. Then we’ll see how open and trusting you’ll be.

And then shit got totally real.

We sat at our gate reviewing our notes and talking about the trip, the meetings we had scheduled, and things we might do during our downtime. The Georgia Aquarium wasn’t far from our hotel; the Coca-Cola museum might be interesting too.

Were the Braves in town that week? Maybe we could go to a game.

We were so engrossed in our conversation that I didn’t notice him when he arrived and sat down in the seat across from us.

Though I couldn’t put my finger on it, when I did look up and see him my gut told me that something about this kid just didn’t seem right.

He was a rather dark-skinned fellow, Sri-Lankan, East-Indian, Pakistani, or maybe Afghani; I wasn’t sure. Dare I say it? It’s hard to tell because people from that part of the world all…well you know what I mean.

I guessed he was in his early twenties. He was clean-shaven with short wiry jet-black hair. He was dressed like any ordinary North American youth: jeans, a plain gray t-shirt, and sneakers. But he was thin as a rail and sweating profusely.

His pitch-black eyes looked up frequently as they darted suspiciously about the terminal.

Was he on the lookout for something?

Afraid of being discovered perhaps?

Maybe he was scouting the place so he could report back on the security strengths and weaknesses of the Philadelphia airport to someone later.

Mind your own business dummy, he’s just curious and looking around.

His carry-on bag was on the seat beside him and he had a laptop with a big Texas A & M Longhorns sticker across its cover. Now I couldn’t tell you exactly what I thought a Texas A & M student should look like, but I was pretty sure it wasn’t him.

He finally noticed me staring and for a brief moment our eyes locked.

I felt embarrassed but I didn’t look away. Instead I gave him a quick polite nod. He did not reciprocate. In fact he stared through me with what seemed like the coldest, deadest gaze I’d ever seen from another human being.

I shuddered and forced myself to deny what I was thinking and instead turned to talk to Dave about the weather for the coming days in Atlanta.

We decided to stretch our legs so we collected our things and took a stroll to the other end of the terminal.

When we returned to our gate Al-Qaeda Junior (as my mind had now taken to calling him), was no longer there. 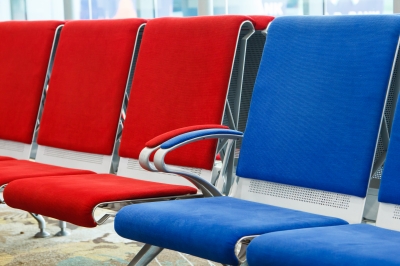 Good, he must be on another flight; somebody else’s problem, I thought to myself.

We sat down and talked business again. A few minutes later I felt a presence and looked up only to find A-Q Junior standing right over us.

“Excuse me,” he said in a heavy accent while pointing to his carry-on. “You watch my bag – I go washroom.”

I shook my head and replied in a polite but firm tone, “Mmm, no I don’t think that leaving your luggage with complete strangers in an airport is a good idea nowadays, do you?”

Did he understand me?

I spoke a little slower, “You should take your bag with you.”

It seemed the possibility that anyone would refuse had not crossed his mind.

Again he gave me that same blank soulless stare and then calmly walked away towards the washroom leaving his bag where it was on the chair as if I’d just said, Sure no problem dude!

As he disappeared into the washroom Dave and I looked at each other, unsettled.

I looked over at the bag, half expecting it would blow up in our faces any second. 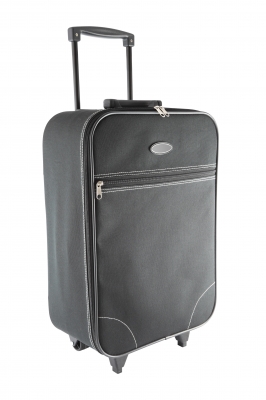 Do we flag down security and report this sweaty kid just because he looks like he comes from a currently unpopular part of the world?

And report him for doing what exactly? Having a bathroom emergency?

After all, he went through airport security like the rest of us hadn’t he?

They screen and X-ray everybody’s bags, so he couldn’t have anything dangerous in there. Right?

Knowing how some officials overreact, did I really want to be responsible for having an innocent kid shipped off to Guantanamo because of an irritable bowel?

Dave and I looked at each other hesitantly. Dammit, paralysis through analysis they call it.

Part of me thought, that’s how people become victims.

That was it, I couldn’t take it anymore. After what seemed like an eternity of indecision I finally reacted. “I think we should report this.”

Dave shrugged, unsure. As I stood to go find security A-Q Junior reappeared, sat down next to his bag and pulled out his laptop as if nothing had happened.

I took a deep breath and sank back into my seat.

He offered us a week grin, then leaned over and said in a low tone, “I no take bag to toilet because…”, there was a long pause as he looked down averting our gaze in apparent embarrassment, “Jesus papers.”

“Ahh” I nodded reassuringly, pretending I understood as I leaned back in my chair.

I looked over at Dave to see if he’d heard the same thing as me. His exasperated expression that screamed, what the hell does that mean, confirmed that he had.

I took a deep breath and announced to Dave that I was going for another walk, and then stepped away before he had a chance to reply.

Damn, didn’t anyone else see how weird this kid was?

I questioned myself as I walked. Was I giving in to fear and suspicion, and jumping to conclusions based on appearances?

Racial profiling they call it.

Or at least, I don’t want to be seen as a racist.

The internal debate continued, You also don’t want to be dead, blown up in mid-air or flown into a building.

C’mon absolutely everybody knows that you don’t leave bags unattended in an airport – not even for a minute! This kid can’t be that stupid!

Maybe I’d have a quiet talk with security back at the gate and let them sort it out, but when I got there boarding had already begun.

I produced my boarding pass and ID, got on the plane and made my way to my seat. Dave was already buckling himself in.

He saw me looking around and read my thoughts.

“He’s across the aisle three rows behind us, 27C.”

I turned and watched as A-Q Junior gently slid his bag into the overhead compartment.

Then rather than sitting down, he pulled a cell phone from his back pocket, turned it on, made a beeline for the back of the plane and promptly locked himself in the washroom.

Stunned, I fell into my seat and stared at Dave, both of us shaking our heads.

He leaned in, “I don’t want to come off as racist but something is definitely off with that kid.”

I looked towards the back of the cabin and then back at Dave. I nodded, then reached up and pushed the call button on the panel above us.

Someone else would decide what was right.

4 Responses to The Kid in 27C – Fear, Racism, and the Excitement of Business Travel

The life of B

Mainly through the lens of a Nikon

A Blog About Film and Film Cameras. Exploring My Personal Vision through the Intersection of Life & Art.